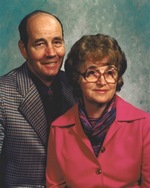 Bringing sunshine into all of our lives, George was born January 19,1926 in Winooski, VT to George and Mary (Lefebvre, a.k.a. LaFave) Nattress. He attended Shelburne Schools, and acquired his GED in the Marines. On June 28, 1947, he married Jeannette Sylvia Gaboriault at St Francis Xavier Catholic Church in Winooski, where he became a longtime parishioner.

George proudly served his country during WWII in the US Marines, 2nd Marine Division serving in combat situations as a 17 year old. He was employed as a Manager at A.D. Pease Grain, Co. for 32 years, and ultimately retired from General Electric in 1987. He loved sharing time with family, friends and co-workers, especially when jokes would add lightness and joy to the situation. His keen sense of camaraderie and loyalty enriched relationships throughout his life. Always active, and involving his whole family in his interests, George enjoyed boating, fishing, hunting, skiing, playing baseball and horseshoes, card playing, cruising, square dancing and camping. He was never happier than when sharing work; his sense of humor always made the job easier, and the day brighter.

George is survived by his five children: Ann Jean Sorrell and her husband James, Peter George Nattress and his wife Johanna, Mary Jane Peters and her husband Richard, Joyce Nancy Letourneau, and Thomas Paul Nattress and his wife Melanie; eight grandchildren: Justin Sorrell and his wife Lauren, Sabreena Sorrell, Bradford Kernan, Benjamin Peters, Hilary Bayse and her husband Craig, Elizabeth Letourneau; and Amanda and Lydia Nattress; and two great-grandchildren: Maggie and Porter Bayse. His beloved wife, Jeannette, predeceased George on February 8, 2011. His three older sisters, Mazie Emmons, Margaret Linehan, and Grace Cole, predeceased him. George has left his family, as well as many extended family and countless friends, with a smile on their faces and a positive “can-do attitude.”