In Memory of
Phyllis
Atherton
1924 - 2017
Click above to light a memorial candle. 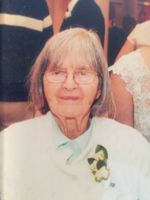 Phyllis Marie (Hardy) Atherton passed away at her home on Saturday, May 20, 2017 at the age of 93. She was a devoted wife and mother, an avid gardener and musician, and a tireless volunteer in the community.

She was born on March 29, 1924 in Dummerston, VT. She graduated from Brattleboro HS in 1942, and received her Bachelor of Science Degree from the University of Vermont in 1946, and her Masters Degree in Home Economics from Penn State in 1953. The subject for her thesis was "A Comparison of the College Wardrobes Considered Essential by Two Hundred Freshman and Junior Women Students at The Pennsylvania State College". At Penn State, she was a member of Omicron Nu, a college honor society for students in human sciences.

Phyllis and her husband Henry were married on August 24, 1947 and celebrated their 68th anniversary before Henry passed away in 2016. She designed the house that they lived in for 60 years. Phyllis is survived by her brother and his wife, Richard and Roena; three sons and their wives, Bill and Toot, Larry and Linda, and Bob and LeAnn; 11 grandchildren and 13 great-grandchildren.

Phyllis was a leader. She started the Red Cross swim program in Mallets Bay, VT and the string program at South Burlington High School. She was extraordinarily active with the Cub Scouts and Boy Scouts, and earned the Silver Fawn award, the highest regional award for a female scout volunteer for years of dedication to scouting. She and Henry ran the roundtable program for teaching adults how to lead scout programs. She was a President of the Lake Champlain Swim Club, and a President of the Champlain Valley Swim League.

Phyllis had many interests. She was an avid gardener and a gifted painter. She played cello in a string quartet and the University of Vermont orchestra. She volunteered for many years at the Flynn Theater, and was deeply involved in her church, serving on various leadership and ministry teams, and singing in the choir. She played for many years in the church's bell choir, and eventually did solo handbell performances. She was deeply committed to attending her kids' sporting and other events.

Visitation will be Wednesday May 24 from 10am-noon at LaVigne Funeral Home and Cremation Service, 132 Main St, Winooski, VT 05404. A Funeral Service will follow at 1:00pm at the First Congregational Church, 38 Winooski Avenue, Burlington VT 05401. Since parking at the church is limited, please use the parking garage and on street parking. In lieu of flowers please make donations in Phyllis' name to the Vermont Youth Orchestra Association, 223 Ethan Allen Avenue, Colchester, VT 05446 or through their website, www.vyo.org. Condolences may be shared at www.lavignefuneralhome.com.