In Memory of
Elizabeth
Finnegan (Handy)
1936 - 2017
Click above to light a memorial candle. 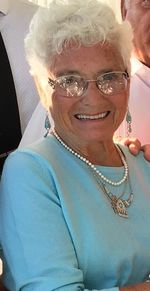 Elizabeth Ann Handy Finnegan, 80, of Colchester passed away July 4, 2017 surrounded by her loving family. She was born in Newport City, VT on July 31, 1936 to the late Thomas and Louise (Menard) Handy. Liz grew up in Burlington, graduated from Cathedral High School and married the love of her life John Michael Finnegan on July 26, 1958, who predeceased her on April 26, 2016. She was a co-owner in Handy Grocery on King Street for many years. She loved running her stand, Finny's Fine Foods, at the Champlain Valley Fair for nearly two decades. She also enjoyed her time working for GoGo Gas in Winooski and her most recent venture driving taxi for her cousin's business, The Blazer Transportation Group. Liz also was a licensed real estate agent and had her own company, The Beckoning Country Real Estate Agency. She enjoyed fishing, boating, traveling the world and spending time with her family and friends.

The family would like to thank all the wonderful and caring staff and volunteers at the University of Vermont Medical Center and the Vermont Respite House for all the care and compassion they gave to Liz in her final weeks of life.

Visitation will be held from 4:00 pm to 7:00 pm Thursday July 13 at LaVigne Funeral Home and Cremation Service, 132 Main St, Winooski, VT. A Mass of Christian Burial will be at 11:00 AM Friday July 14 at St. Francis Xavier Catholic Church, Winooski, VT with burial to follow at Resurrection Park Cemetery in South Burlington. Condolences may be shared at www.lavignefuneralhome.com. Donations in Liz's memory may be made to the McClure Miller VNA Respite House or Saint Anne's Shrine in Isle La Motte.