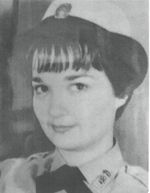 Darlene Mary (Boucher) Arel passed peacefully into the arms of the Lord with her loving family by her side on September 15th at the Arbors in Shelburne. Darlene was a beautiful caring person who had a kind word for everyone. She was born to Homer and Mable (Gilmond) Boucher on June 15th 1939. Darlene was married to her soulmate Elmer Arel Sr. (Al) on July 4th 1957 and enjoyed over 60 years together. Her greatest joy was her family. Together they were blessed with a daughter, Cindy (Arel) Hamel and a son Elmer Arel Jr. (Chuck) and his wife Sarah. Grandchildren Erin Zeno,(Heath) Joseph Cowhig (Sarah) Sean Hamel (Vickie) Mark Hamel. Candice Smith (Jeremy), Brandon, and Ryan Arel. Nichole Clark (Duke) Christopher Hamel.8 great grandchildren and many nieces and nephews. She also was blessed with lifelong best friend, Rita Gauthier and her good friend Carol Michel.

Darlene was the first female police officer for the city of Winooski. Serving from 1967 to 1977 She was assigned to the Juvenile division and was always there for any adolescent who needed her 24/7.

In 1977 she became a credit officer for Vt gas and continued to work there until her retirement in 1997.

In 2001 her and Al purchased a lakeside camp in No. Hero and spent the next 15 years with family and friends celebrating life to the fullest.

Darlene was predeceased by her parents, her twin sister Dale Ward and her brother Duane Boucher. Calling hours will be from 4-7 pm at LaVigne Funeral Home and Cremation Service in Winooski on Friday, September 22. A celebration of her life will take place on Saturday, September 23rd at 11:00 am at St. Stephens Church in Winooski.

Darlene spent the last 6 months of her life being loved and cared for by the entire staff at The Arbors. From the front offices, to the kitchen, every staff member took care of her like she was their own mom. Our heartfelt thank you to every one of you.

In lieu of flowers, donations can be made to The Arbors in Shelburne, Vt. or the Alzheimer's Association in memory of Darlene Arel.