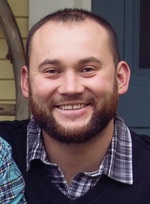 Andrei Sergiu Noni died in a tragic motorcycle accident on October 21, 2017 in Winooski, VT at the age of 30.

Andrei was born in Chisinau, Moldova on July 4, 1987 to Sergiu Noni and Taisa Zagorodnova. He graduated from Ungheni High school and continued on to receive a Bachelor's Education Degree from the Technical University of Moldova in machine engineering. In 2010 he met and fell in love with Colleen Elizabeth O’Brien and in 2011 they were married at the falls in Winooski, VT. Andrei always had a passion for high performance vehicles and merged this passion with his talent as an automobile mechanic. Andrei enjoyed sports, especially soccer, which he was extremely talented at, as well as movies, reading and spending time with his family. He loved to stare into the sky and dream about the planets and outer space. He had a heart of gold and would give the shirt off his back to anyone in need.

Andrei is survived by his wife, Colleen Elizabeth O’Brien Noni, sons Calvin Andrei Noni (3 years) and Levi Andrei Noni (8 months) of Winooski, VT; father Surgiu Noni from the city of Ungheni, Moldova; mother Taisa Zagorodnova from the village of Hrubna Noua, Moldova; his grandparents Ustinia and Pimen from the village of Hrubna Noua, Moldova; father-in-law and mother-in-law Tim and Sue Ann O’Brien of Winooski, VT/Naples, FL; grandmother-in-law Shirley O’Brien of Colchester, VT; the rest of his family and friends.