In Memory of
Bernard
Thibault
1935 - 2018
Click above to light a memorial candle. 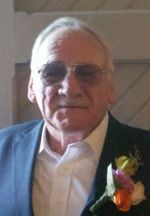 Bernard was born on April 8, 1935 in Winooski, the son of the late Cecile (Lanoue) and Louis Philippe Thibault.

He was a carpenter and jack-of-all-trades, retiring from the University of Vermont's Physical Plant in 1997. He retired from the Naval Construction Battalion (Seabees), UBC Local 1996, and was an Honorary Life Member of the Knights of Columbus.

Bernard enjoyed spending time at the camp that he built with his family. He was dedicated to his faith, family and enjoyed the countless conversations on his front porch.

He is survived by his wife Jeanette of 62 years, his children and their spouses, Anne-Marie and Michael Mayo, Albert and Debbie, Gerard and Tammy, Norman and Sandy, Denise and Bernie Bora, 13 grandchildren and 5 great-grandchildren.

He is also survived by his siblings and their spouses, Sr. Yvette Thibault, C.S.C., Rita Dufresne, Helene and Rod Martin, Alice and Ron L'Ecuyer, Richard, Victor and Shirley.

He was predeceased by his son Michael, brother Louis, and sisters Lillianne and Jeanne.

The family would like to thank the Visiting Nurse Association, the staff at Starr Farm Nursing Center and all the friends, neighbors and family who provided support.

In lieu of flowers, donations can be made in his memory to St. Francis Xavier School in Winooski.

A Mass of Christian Burial will be celebrated at 10:00 am on Tuesday, April 10 at St. Francis Xavier catholic Church in Winooski. There will be no visiting hours.

Arrangements are under the care of LaVigne Funeral Home and Cremation Service in Winooski. Condolences may be shared at www.lavignefuneralhome.com