In Memory of
George Joseph
Trono
1933 - 2018
Click above to light a memorial candle. 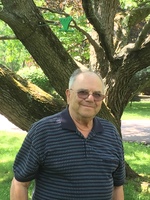 George Joseph Trono, a great husband, father, grandfather, uncle and friend to many passed away on Friday, June 1, 2018, four days shy of his 85th birthday. He was born and brought up in Burlington, Vermont, the youngest of Guiseppe and Prudenza Trono's ten children. George graduated from Burlington High School and the University of Vermont, and served 14 years in the Vermont Air National Guard. On August 17, 1957, George married Katherine Hooper at the Cathedral of the Immaculate Conception in Burlington, Vermont.

George began his career at the Metropolitan Insurance Company and then worked at the University of Vermont in the computer department. In 1971 he embarked on a 40 year career of entrepreneurship by owning and operating Luigi's Pizza and Sub Shop in Vergennes and then the GT Bagel Factory in Colchester and South Burlington.

George enjoyed many years of playing softball, bowling, and golfing and cherished all the great friends he met while doing so. He also coveted the 25 plus years he and his wife, Kitty, spent wintering in Florida and especially enjoyed being a long time season ticket holder for both the Tampa Bay Lightning and UVM Hockey.

Left to cherish George's memory are his loving wife of over 60 years, Katherine "Kitty" Trono, his three sons: Steve, his wife, Monique, and their two children, George and Natalie; Dan and his two sons, Ben and Charlie; and Tom and his partner, Pamela Peden, and her son Anthony. He is also survived by two brothers, Anthony and Albert, and his wife, Evelyn, and sisters-in-law Noreen Trono, Jane Trono and Martha Hooper. George was predeceased by his sisters Pasana and Eva, and his brothers Michael, Louis, John, Guy and Joe.

Though George will be missed beyond words, we take solace in the fact that he lived a very long and happy life, touching many hearts with his humor, generosity and kindness. We will forever carry with us all the amazing stories and memories he shared with us along the way.

A Mass of Christian Burial will be held at 1:00 p.m. on Saturday, June 9, 2018 at the St. John Vianney Catholic Church in South Burlington, VT, with burial to follow at the Resurrection Park Cemetery. In lieu of flowers, memorial contributions may be made to The Allenbrook Home For Youth, 102 Allen Rd, South Burlington, Vt 05403. Arrangements are under the care of LaVigne Funeral Home and Cremation Service. Condolences may be shared at www.lavignefuneralhome.com.