In Memory of
Dwight Lawrence "Larry"
MacPeek
1934 - 2018
Click above to light a memorial candle. 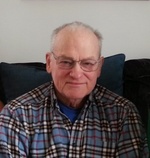 Dwight Lawrence MacPeek, age 83, passed away peacefully on June 29, 2018 after a 14-month struggle with cancer. Larry, as he is known to family and friends, was born to Edwin Lester MacPeek and Gladys Irene (Van Syckle) on July 16, 1934 in Newton, NJ. He married his beautiful wife Jean Lisbeth Calkins on June 23, 1957, who predeceased him in November 1995. He was also predeceased by his sister Virginia and brother Donald.

Larry is survived by their three children, Karen Laurie and her husband David of Underhill, Jeffrey MacPeek of Williston, and David MacPeek and his husband Aaron Roy of Colchester; two grandchildren Davis Laurie and wife Jen of Springfield, VA, and Chelsea Laurie and partner Patrick Teehan of St. Albans; five great-grandchildren Kemper, Ethan, Wilder, Riley and Asher; and several nieces, nephews and their families.

Larry graduated from Plattsburg High School in 1952, and from the New York Agricultural and Technical Institute in Canton, graduating at the top of his class in 1955. He served in the US Army Reserve in 1957, worked 12 years at the Sheridan Iron Works in Champlain NY, and finally IBM in Essex Jct for 24 years until his retirement in 1992. Larry was a member of the Chazy and West Chazy Fire Departments, and the Williston Fire Department. He enjoyed travelling, always having maps on the table for the next big trip, and woodworking, specializing in wooden toys that he sold through local farm stands.

The family wishes to thank Dick Ransom, Denise Martin, Fred Peet, and especially Patty Towle APN for all their help, love and support.

There will be a wake to celebrate his life at LaVigne Funeral Home and Cremation Service in Winooski on Saturday, July 7 from 10 AM to noon, and a private family burial. In lieu of flowers, donations can be made to the McClure-Miller VNA Respite House in Colchester. Condolences may be shared at www.lavignefuneralhome.com