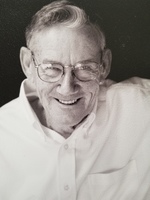 Bill's story begins on July 19, 1932, the youngest child of Chesley and Maude Ferguson of Oswego, Kansas. He graduated from Oswego High School in 1950 and from there joined the Air Force. While stationed in Caribou, Maine, he went to the home of a fellow airman on leave and was set up on a date with Janet Davis of Waterbury, Vermont. Two years later on April 7, 1956 they were wed in Waterbury Center, VT. They made their home in Montpelier and Bill worked as a police officer in Montpelier, a dispatcher for the Vermont State Police and he retired as a Vermont State Motor Vehicle Inspector in 1987. Bill and Janet welcomed their first child, Jeff in 1965 and their daughter, Jean in 1968. In the fall of 1969 they moved their family to Winooski where he resided until his death.

After his retirement, Bill worked many miscellaneous jobs. His favorite being Acting Police Chief in Milton, VT in the late 1980's.

Some of Bills favorite memories were at "The Calais Palace." This is where he brought two CCTA busses and built them into a camp. If you know Bill, you've heard the story, you may have even had the pleasure of visiting the Palace. Cribbage was the game of choice and though it was technically a deer camp, stories were much more plentiful than venison!

Bill will be remembered by his wife of 62 years, his son Jeff and wife Kelly of Milton, his daughter Jean of Colchester and his 5 treasured grandchildren; Nicholas and Jamie Ferguson and Thomas, William (his namesake) and Joseph Ward. Bill was predeceased by his parents, 2 sisters, Freda and Letha and 4 brothers, Clifford, Carl, Ray, and Ellis. He is survived by one brother, Ralph Ferguson and his wife Arzella of Kansas City, KS and several nieces, nephews and cousins.

The family would like to send a heartfelt thanks to the VNA, especially Gale and Tom whose help and guidance were invaluable. They would also like to thank Brenda Dupius for the care giving help that she so selflessly provided, as well as the Vermont Respite House. Though his stay there was short, their care and concern was extraordinary.

Please join us for a celebration of his life on Friday, July 6 at 10:00 a.m. at the Winooski United Methodist Church on West Allen Street. Parking will be limited, so get creative! Or wear your walking shoes and park at LaVigne Funeral home and Cremation Serive on Main Street. We also welcome our friends on Thursday, July 5th for a casual and friendly gathering at LaVigne Funeral Home from 4:00-6:00 p.m. Please feel free to wear comfortable, weather appropriate attire. Condolences may be shared at www.lavignefuneralhome.com.