In Memory of
Stephen Edward "Steve"
Ticehurst
1964 - 2018
Click above to light a memorial candle.
Memorial Candle Tribute From
LaVigne Funeral Home
"We are honored to provide this Book of Memories to the family."
View full message >>>
Send Flowers
Menu 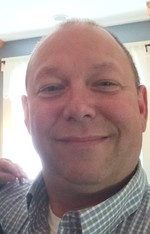 Winooski - On November 3, 2018 Stephen Edward Ticehurst was called unexpectedly from this life to God's heavenly kingdom.

Steve was born to James and Margaret Ticehurst on May 11, 1964 in Burlington. Steve was educated at St. Francis School in Winooski and graduated from Rice/Winooski High School. He also attended Champlain College for two years.

Steve leaves behind his beloved wife Brenda, who has been his faithful partner for over 30 years and whom he considered not only is wife but the very essence of his existence. He leaves behind his daughter Alexandria and husband Christopher Mount, their wonderful children Winnifred and Arthur, and his son Nicholas.

He is also survived by his only brother Michael and wife Louise, as well as his God-parents Anthony and Katherine Martello, his aunt and uncle, as well as many cousins and family members. All feel a deep loss in Stevens passing.

For the past many years Steve served as the Director of Maintenance for the Diocese of Burlington and considered it his real honor and privilege to serve and have served the Bishop, his parishes and its pastors and his fellow employees at the Diocese Steve was gifted in the fact that he was able to reconstruct many alters within these parishes and was especially proud of this design and construction of the chapel at the Diocese headquarters in Burlington. Which will bear his mark for years to come. Steve also took pride in keeping the Diocese parishes safe and available to its parishioners and strived for continued excellence of Diocese property. God and the Diocese have lost a trusted and dedicated servant.

Steve was a biker, camper, cook and friend. He loved weekends camping in his RV with Brenda and his friends. He also loved to work his land in Jay Vermont and spent these past three years working his land in preparation of building a home there next year. It was on his land in Jay when the Lord called him home to heaven. Steve could do just about anything and many at the Diocese and his entire family called him a Jack-of-all-trades, and rightly so. Everyone who knew Stephen always knew that if you asked Steve for help, he was always there, and with a hammer and smile, willing to go the extra mile. He will be greatly missed by those who he touched and who knew him.

Visitation will be held from 4:00 PM to 8:00 PM Thursday, November 8, 2018 at LaVigne Funeral Home and Cremation Service, 132 Main St, Winooski, VT 05404. A Mass of Christian Burial will be held at 10:00 AM Friday, November 9, 2018 at St. Joseph Cathedral 29 Allen Street, Burlington, VT 05401 with Bishop Coyne as celebrant and with con-celebrant Monsignor Peter Routhier as well as other priests of the Diocese. Condolences may be shared at www.lavignefuneralhome.com