To share your memory on the wall of Mary Couture, sign in using one of the following options:

Provide comfort for the family of Mary Couture with a meaningful gesture of sympathy.

Print
Mary Couture passed away peacefully on February 22 at Starr Farm Nursing Home surrounded by her family. Mary's final days were spent amongst her family who were consistently by her bedside.

Born on October 21, 1939 in Essex Junction, sh... Read More
Mary Couture passed away peacefully on February 22 at Starr Farm Nursing Home surrounded by her family. Mary's final days were spent amongst her family who were consistently by her bedside.

Born on October 21, 1939 in Essex Junction, she was the eldest child of John and Genevieve Coon. She graduated from Essex High School in 1957, and Fanny Allen School of Nursing in 1959. She married Robert Couture on August 13, 1960, who predeceased her in 1990. Mary and Bob lived most of their lives in South Burlington where they raised their children.

Mary enjoyed her career as a nurse and worked at several hospitals and nursing homes including Green Mountain Nursing Home and the Pillars. She especially enjoyed working with the elderly. She passed this love of nursing on to her granddaughter who followed in her footsteps.

Mary leave behind her son William and his wife Kim of South Burlington, her daughter Susan Ryan and her husband Michael of Grand Isle, granddaughter Sarah Couture and grandson David Couture. She also leaves behind her sister Pauline Pfingst, brother John Coon and his wife Grace, sister in law Kristine Couture and many beloved nieces and nephews. She is also predeceased by her brother Matthew Coon, brothers in law Bernard Couture and Hugh Pfingst and sisters in law Gail Coon and Marcia Coon.

Family was extremely important to Mary and she found the most joy in spending time with them. Her grandchildren were the highlight of her light and was incredibly proud of them. Mary had a love for reading and always had a book with her.

The family wishes to thank the nurses and staff at Starr Farm who made her final days comfortable and peaceful.

A Mass of Christian Burial will be held at 11:00 am on Wednesday, February 27 at St. John Vianney Catholic Church on Hinesburg Road in South Burlington.

In lieu of flowers, please make donations in her name to the Humane Society of Chittenden County at 142 Kindness Ct, South Burlington, VT 05403. Arrangements are under the care of LaVigne Funeral Home and Cremation Service.
Read Less

We encourage you to share your most beloved memories of Mary here, so that the family and other loved ones can always see it. You can upload cherished photographs, or share your favorite stories, and can even comment on those shared by others. 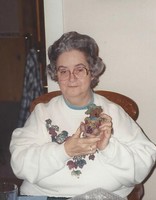