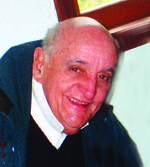 Bernard Jean-Vianney L’Ecuyer “Lec” died on Friday March 1, 2019 at Elderwood at Burlington (Starr Farm) Nursing Home after a lengthy stay for dementia. Lec was born in Winooski, Vt. on Feb. 10, 1927 to Ovila and Eugenie (Menard) L’Ecuyer, the 12th of 13 children. He was a lifelong parishioner of St-Francis Xavier Church and resident of Winooski, VT. He attended St-Louis Convent and was in the first class to graduate from St-Francis Xavier School. He was a member of the basketball team of Winooski High School and graduated from there after his discharge from the US Army in 1947. He retired in 1987 from General Electric in Burlington, VT where he was a scheduler. He married Claire Giselle DeVarney, a classmate in elementary school, on May 15, 1954 at St-Francis Xavier church in Winooski, VT. They moved into their new home which they had just finished building with the help of his brothers.

His scheduling experience was a great help when he and Claire traveled across the US having set up every reservation and stop before starting out. He brought his mother-in-law on many Sunday trips as well as a trip to Charlotte, NC to visit his eldest sister-in-law. In retirement he spent many hours walking around Winooski and enjoying the park bench on the corner of Main and West Allen Street with his friends.

Having no children of his own he took great pleasure being a grandfather to his nieces and nephews and their children picking them up from school or taking them out for treats at local restaurants.

He is survived by his wife and many nieces, nephews, grand-nieces and grand nephews and their children.
He was predeceased by his parents, many in-laws and his siblings Henri-Jean, Jeanne Prairie, Armand, Horace,
Bernadette Baker, Roger, Joseph, Adrien, Robert, Lorraine Robert, Claire, and Therese Bourdeau.

A Mass of Christian burial will be celebrated on Monday March 11 at 11:00 AM at St-Francis Xavier Church on
3 St. Peter Street in Winooski, VT. Visitation hours for family will be held from 9:00 AM till 10:30 AM prior to the funeral at 11:00 AM at LaVigne Funeral Home and Cremation Service, 132 Main St, Winooski, VT.

In lieu of flowers please consider making a donation to St-Francis Xavier School or to a charity of your choice.

All rights reserved. This obituary is also archived at obittree.com