To share your memory on the wall of Charles Worcester, sign in using one of the following options:

A member of the Burlington High School track team, Charlie won the State Championship for the discus throw in 1946, and graduated that same year. After serving two years in the US Navy, he began a career in the hardware business. He was manager of Hill's Hardware in the Ethan Allen Shopping Center, North Ave. for 20 years, and then owned the store for another 10. Long-time North End residents remember the store as a place you could find not only whatever you were looking for, but cheerful do-it-yourself advice as well.

Charlie and Jan were square dancers for 30 years, through which they made many long-lasting friends. They also loved to travel, including as far as Florida and California with their RV. They have been parishioners of St. Mark Catholic Church since 1957.

The family would like to thank Dr. Karen Sokol and the Visiting Angels home caregivers for making it possible for Charlie to spend the last year of his life at home.

Calling hours will be held on Tuesday October 15, at LaVigne Funeral Home, 132 Main Street, Winooski, 4-7 pm. A Funeral Mass will be celebrated on Wednesday October 16, at St. Mark Church, North Ave., Burlington, at 11 am, followed by a reception at St. Mark and then burial at Lakeview Cemetery.

We encourage you to share your most beloved memories of Charles here, so that the family and other loved ones can always see it. You can upload cherished photographs, or share your favorite stories, and can even comment on those shared by others.

Posted Oct 11, 2019 at 09:30am
Janice, Tom, Mike, Steve and Mary - Charlie is one of the kindest, most gentle man I have known and his physical presence will be missed very much by all who know him. But we know he still lives in our hearts. May all the beautiful memories of your years with him bring you comfort as you grieve this difficult change in your life.
Comment Share
Share via: 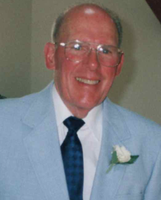