To share your memory on the wall of Raymond Ouimette, sign in using one of the following options:

He was born April 10, 1941 to Raymond and Ellen (Liberty) Ouimette. He attended area schools, served in both Army and National Guard, and graduated from Manchester, NH Technical Institute. Ray worked in transportation for various employers, but the Champlain Valley Exposition and the Shelburne Museum were his favorites. In 1996 he married Joan (McCullock) Brown of Burlington, who survives. He was a devout Catholic, an active member of the Knights of Columbus, and a professed Secular Franciscan.

Ray's survivors include one sister, Jessie Anne Giroux (Roger) of Colchester, one sister-in-law, Dianne Ouimette of Burlington, three nieces and one nephew. His parents and one brother, Thomas, predeceased him.

A Mass of Christian Burial will be held for Ray at Holy Cross Church in Colchester Monday, December 30, at 11 AM. Visiting hours will be Sunday, December 29, from 2-4 PM at LaVigne Funeral Home in Winooski. In lieu of flowers friends are urged to donate to the Alzheimer's Association.
Read Less

We encourage you to share your most beloved memories of Raymond here, so that the family and other loved ones can always see it. You can upload cherished photographs, or share your favorite stories, and can even comment on those shared by others. 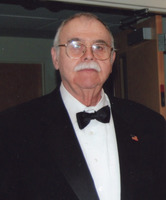