To share your memory on the wall of Barbara Kehaya, sign in using one of the following options:

Provide comfort for the family of Barbara Kehaya with a meaningful gesture of sympathy.

Born in Manchester Village, VT on October 3, 1921, she was the daughter of the late Francis and Abigail McGuire. She graduated from Burr & Burton Seminary (class of 1939) and Trinity College (class of 1956).

On February 13, 1943 she married Richard William Kehaya of White Plains, New York, who predeceased her in 1995.

Throughout her life Barbara served the city of Winooski and the state of Vermont with much dedication and enthusiasm. She proudly represented Winooski as a state Legislator for four, two-year terms from 1982-1990. During this period of time, some of her most notable accomplishments included sponsoring the Vermont Lemon Law and Documented Vessel Bills. She was also very involved in many local community service activities. She was past board member of the Visiting Nurses Association, past president of Trinity College Alumni, past president of the League of Women Voters, past program director for the United States Coast Guard Auxiliary, past president of the Older Women's League, and in 2005 she was coordinator for the Winooski Development Committee.

Barbara's interests and hobbies included music, world travel, reading, and visiting museums. She was always interested in a good conversation in regard to local, state and national politics. Throughout her life, Barbara always had a very strong political and ethical conviction and remained very independent during her elderly years.

She is survived by her six children; Thalia Swinyer and Dr. Leonard Swinyer of Salt Lake City, Utah; Richard and Jean Kehaya of The Villages, Florida; Steven Kehaya of Enosburg Falls, Vermont; Barbara and Gerald Allen of Essex Junction, Vermont; Jason and Susan Kehaya of Saint Albans, Vermont; and Damon and Sheila Kehaya of Rocky Mount, North Carolina. She also leaves many grandchildren and great grandchildren. Barbara was predeceased by her siblings, Margaret McGuire, Walter S. Clemons, and Charles McGuire.

The family would like to thank the wonderful support and compassionate care of Dr. Anne Knott and the caring staff at Mansfield Place, as well as Bayada Hospice.

Burial arrangements are in the care of LaVigne Funeral Home and Cremation Service in Winooski, Vermont. Per Barbara's wishes, there will be no visiting hours or flowers. If you wish, contributions can be made in Barbara's name to your favorite charity. There will be a celebration of Barbara's life at St. Stephen's parish in Winooski at 11:00 AM on Tuesday February 18, 2020. A private internment plans will be made at a later date.
Read Less

We encourage you to share your most beloved memories of Barbara here, so that the family and other loved ones can always see it. You can upload cherished photographs, or share your favorite stories, and can even comment on those shared by others. 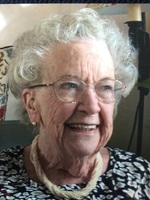